12th December -  A few birds to be seen around the woodland in very cold icy conditions included a small Tit flock consisting of Blue Tit, Great Tit, Long Tailed Tit, got some nice views of a feeding Goldcrest oblivious of my presence, hovering around the leafless twigs, not sure what it was feeding on in these freezing conditions, a few pairs of Great Tit seen further around the woodland trails, a few Robin, Blackbird and Song Thrush scattered around the trails, Corvids represented by a single Jay, Magpie and a Carrion Crow, A Great Spotted Woodpecker could be heard calling, but not seen, a Ring Necked Parakeet flew over the Bronze age burial mound.
Grey Squirrels seemed very prominent around the woodland.
Posted by Merlin52 at 08:54 No comments:

15th Nov-      Not many bird sightings today, but another new fungi sighting for this year in the form of some Purple Jellydisc. 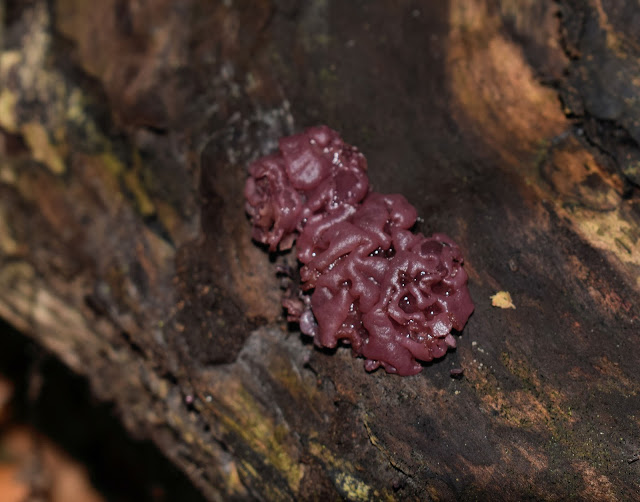 14th Nov-   Another cold damp morning in the woodland, strangely after mentioning the Woodcock in yesterdays blog I unexpectantly flushed one from the Bronze age mound. No camera  though.
other birds included Carrion Crow, Jackdaw, Song Thrush, Blackbird,  Nuthatch calling unseen,
Pheasant, Jay, Magpie.
13th Nov -   I was considering an end to this blog as my sightings and photographs were getting a bit repetative, I've been keeping a diary of my daily dog walks at this site since January 2015, recording my various sightings throughout the seasons. my dog is getting older and not so keen on the longer walks taking in the meadows and glades so I've had to curtail the walks to just the woodland, this appears more to my dogs liking.

There are still a few woodland birds that  have eluded my camera, the Marsh Tit which I have seen on several occassions but never managed to photograph, the Woodcock, Lesser Spotted Woodpecker also come to mind. so I will keep it going for while longer and try to find some different camera angles to record the natural beauty of this lovely woodland. 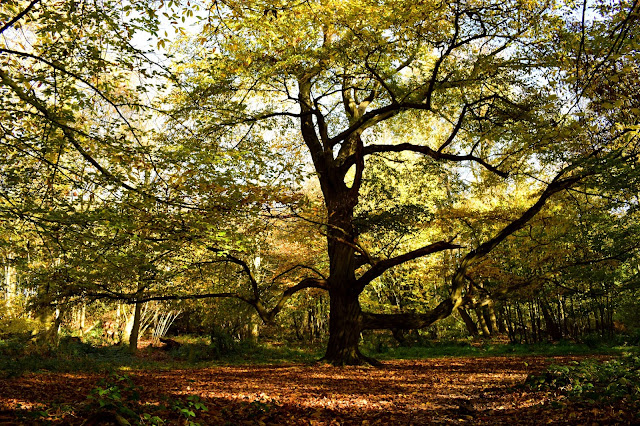 Still some Fungi species appearing around the woodland, I still strugle to positively identify some of these, even with the help of a field guide.

26th Sept -  Still not seeing many birds at the moment in the woodland, I have been looking for the Birds nest Fungi but no luck as yet, I did find this nice Fly Agaric appropriately under a Silver Birch Tree,  newly emerged Stump Puffball and a small unidentified fungi.


22nd Sept- Not been much to report of late, bird sightings remain elusive the only bird of note was a single Treecreeper seen unusually on the edge of the orchard.

An interesting chat with a fungi enthusiast led to him showing me some emerging Fluted Birds nest Fungi coming through the leaf litter, which to be honest I could not even focus on with my eyes let alone try and get a photograph of.

My first Araneus quadratus or Four-spotted Orb Weaver was seen today, the first a probable male taking into account its small size dealing with a freshly caught fly in the long grass alongside the track fence. 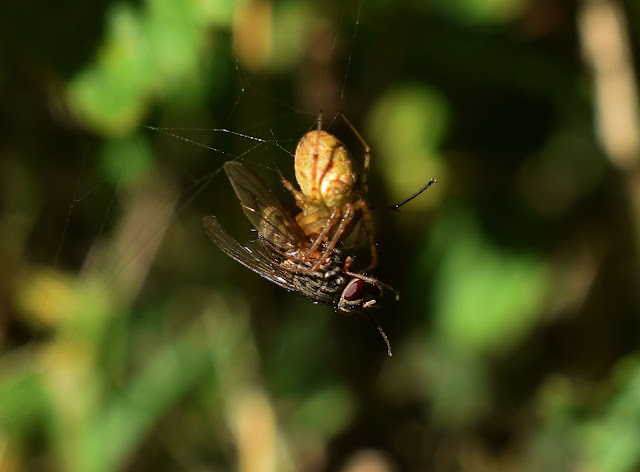 Another Araneus quadratus  again in the long grass in the meadow looks like a plump female. 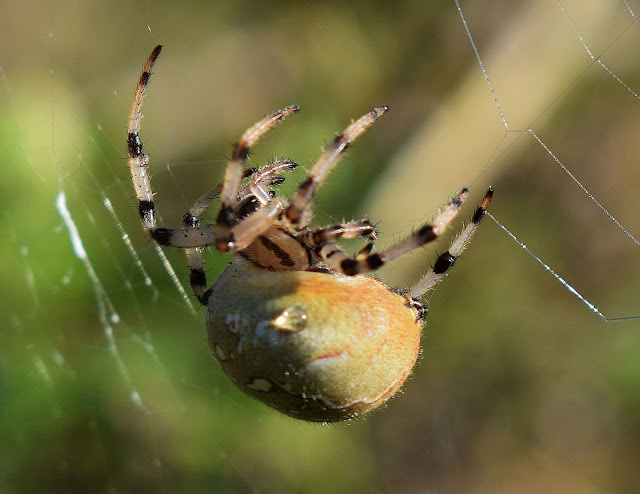 Not sure what this fungi  is called at the moment, seen growing in the long grass in the hedgerow. 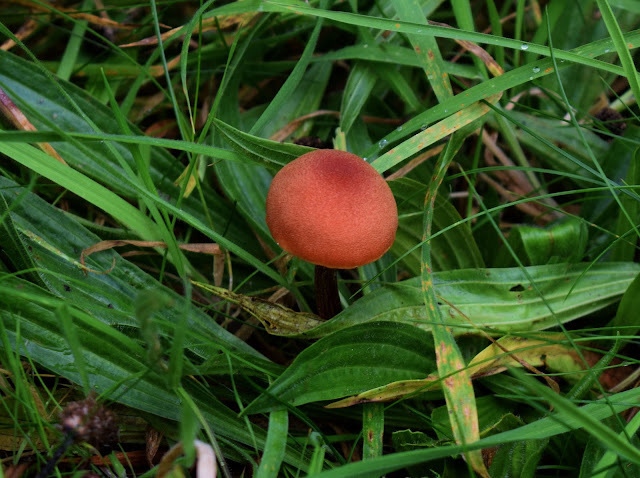 31st Aug - A beautiful warm sunny morning unlike yesterday, not many birds on show still, only bird of note was a single juvenile Green Woodpecker, A few Speckled Woods and one Gatekeeper represented the butterfly world today, two Migrant Hawkers hunting over the brambles. I noticed these two very green crickets sunbathing on a leaf, turned out to be the Long Winged Conehead a type of Bush Cricket.

And another example of the Cross Spider, this one with a reddish hue below. 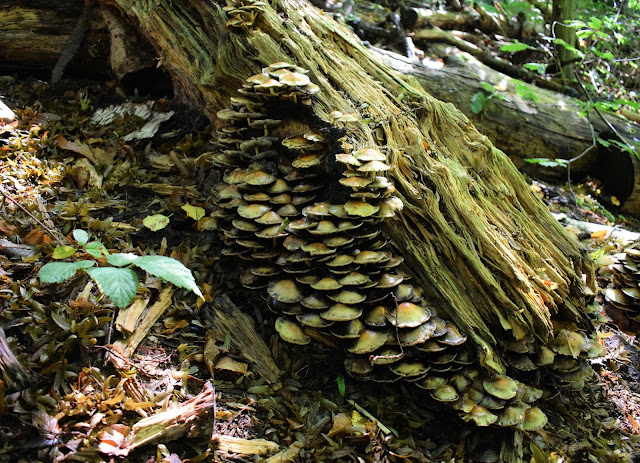 The damp conditions of late have encouraged the woodland fungi to break out in this fine example of deadwood habitat.

30th Aug - Nearing the end of the month now, today feels like autumn is approaching, low temperatures and wet. Found my first Shaggy Inkcaps this morning near the railway embankment on the edge of the woodland. 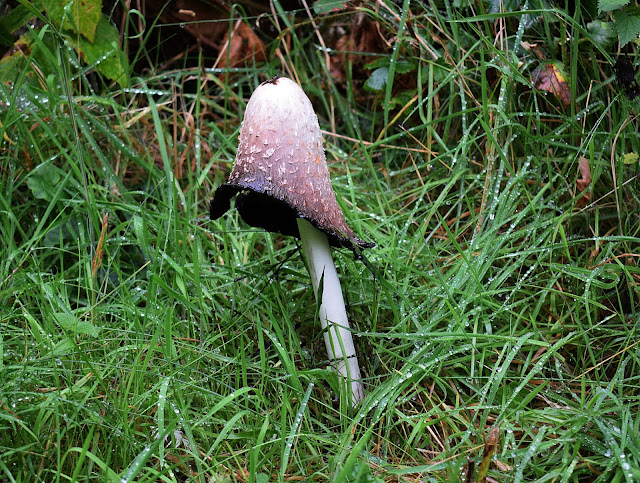 I noticed these Galls on the young Oak saplings growing on the edge of the glades, I suspect they are Oak Apple Galls , caused by a tiny gall wasp.


The Kestrel was seen on the wires over the glades again this morning with not much else to report.

28th Aug - Looking for inspiration among the dew laden spiderwebs on the edge of the woodlands today, came face to face with this little beauty, and judging by the size, a female Wasp Spider, first time I have found one here at Ashenbank, I need to look closer at this area which usally contains hundreds of common Garden Cross spiders.
If you look carefully, well not that carefully you can see a Cross spider very close to the Wasp Spiders web in the second photograph. 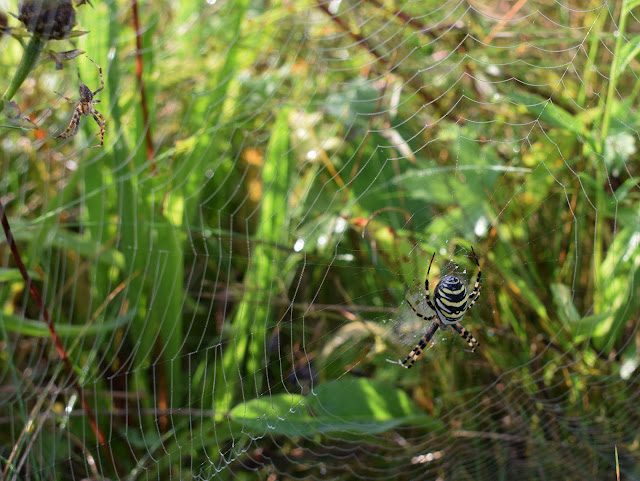 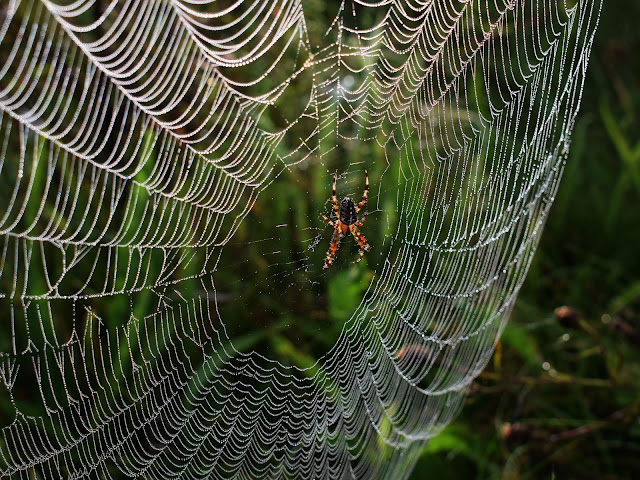 A few Butterfly sightings around the woodland consisted of Large White, Comma, Red Admiral and a few Speckled Woods.

Around the glades  two juvenile Green Woodpeckers were disturbed from the freshly mowed meadows, a male Kestrel resting on a fence post at Ashenbank Pond, the usual, Jackdaws, Wood Pigeon, Ring Necked Parakeets, and Blackbird.
No new Fungi caught my eye today.

As I left the park this morning, hundreds of Hirundines gathering on the telegraph wires, Swallow, House Martin and Sand Martin.


14th Aug - A walk around the whole of the country park today revealed plenty of Butterfly sightings, Speckled Wood in the woodlands, Meadow Brown, Small Heath, Small White, Gatekeeper.
The Highlight was this Painted Lady still in reasonable condition basking in the sunshine by the old air raid shelters in the woodland.

A few Migrant Hawkers seen at various places around the park with just one Common Darter female on show.

A brief view of a Hornet moving through the brambles was nice to see, a few Carder bees on the knapweed in the glades.

Butterflies seen today were a lone Speckled Wood and a few Meadow Browns.

11th Aug - A quick look at the " Stinkhorn " this morning revealed the honeycombed cap as expected, the woodland flies and insects have done their job, the sticky 'Gleba' with the spores dispersed around the woodland, although I cannot think what purpose the Stinkhorn serves in this deadwood habitat.


A few other Fungi caught my eye again this morning, the first I think is possibly a ' Shaggy Parasol ' the second I have no idea at the moment.


Still quite on the bird front although I seem to be concentrating more on the fungi on the woodland floor than at higher level, maybe I am missing them.


Only Butterflies seen today were a few Speckled Woods, Bumblebees represented mainly by White Tailed and Carder, not sure about the Bumblebee in the photograph. 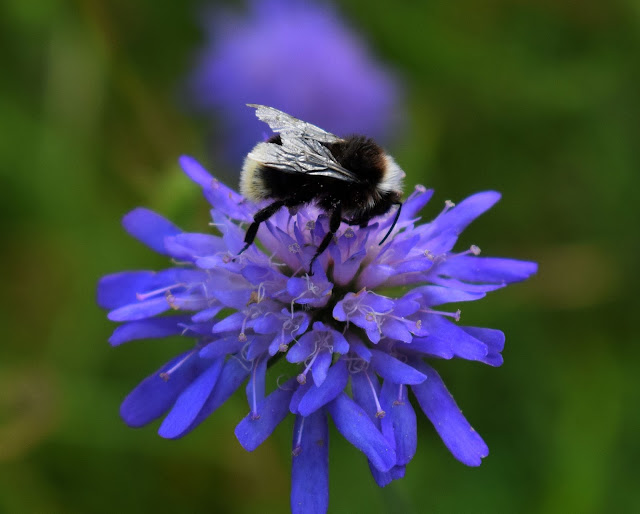 10th Aug - The highlight of today's walk was this freshly emerged Phallus impudicus or as its better known   'The Stinkhorn.'
These impressive fungi emerge from an underground egg, although they can be found at any time of the year they usually lay dormant until the summer months. I have never found one in pristine condition, that usually means freshly emerged with the fowl smelling 'gleba' intake.

Dawn is suppose to be the best time to find these, so at 09.30 this must have been a late emergence, the flies were just beginning to appear on the 'gleba'
This 'gleba' which covers the honeycombed cap is suppose to smell of  dog faeces and rotting carrion, so pretty unpleasant, to be honest I couldn't detect any odour at all when I was trying to photograph it, which is slightly worrying.

This sticky 'gleba' which shows very well in the photograph is quickly attacked by insects, especially flies, which is why it's not usually seen in this state. The spores are in this sticky coating which sticks to the insects legs and transferred to different locations.

Hopefully I will be able to get a photograph of the honeycombed cap tomorrow if it's been left alone. 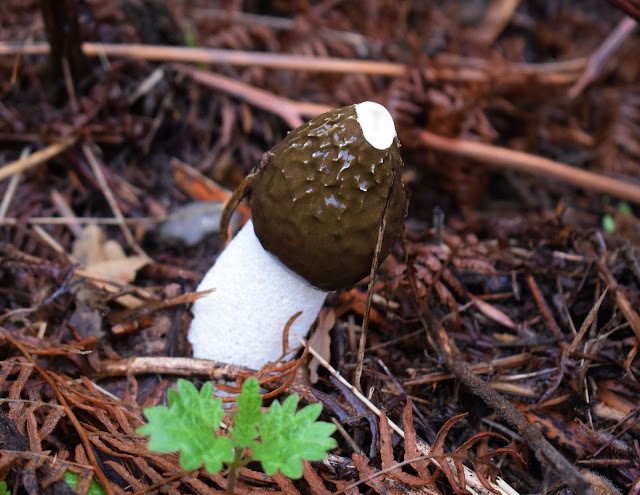 A few other fungi have appeared over night, again not sure what they are at the moment, although the fungi shown immediately below does look strangely familiar. 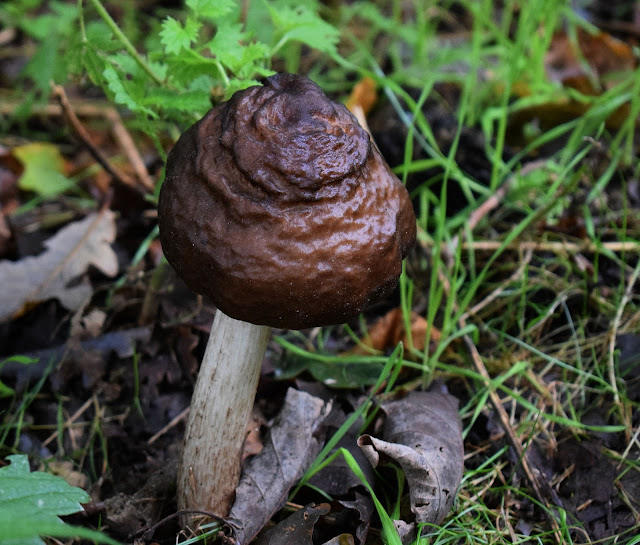 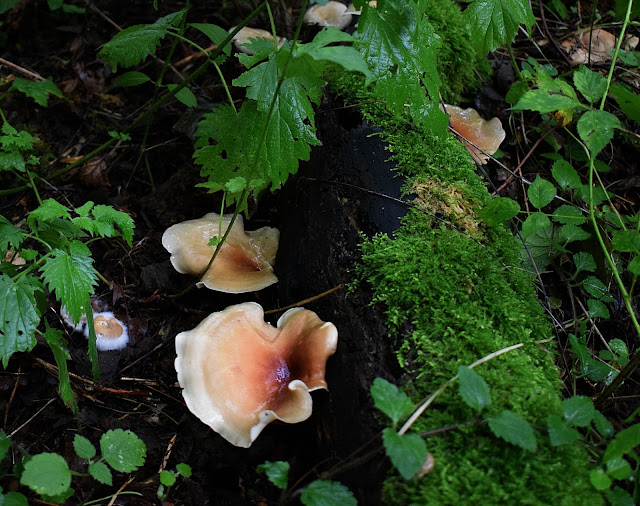 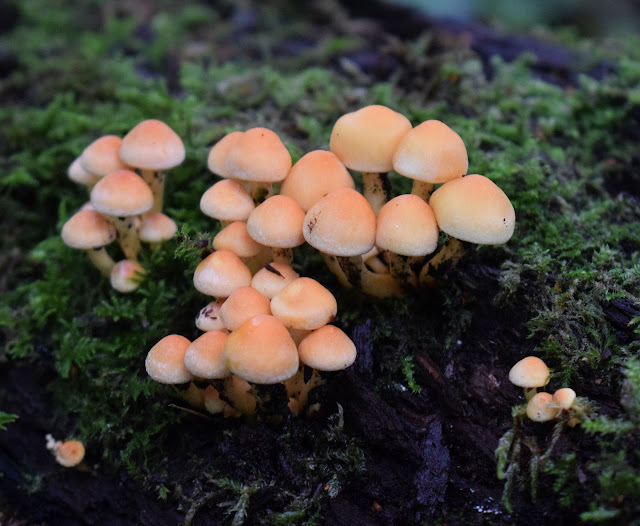 1st to 9th Aug -  The woodlands remain eerily quite at the moment, the odd glimpse of a Jay moving through the tree tops, a few Blackbird, Song Thrush and Juvenile Wrens disturbed in the undergrowth.  Today's walk revealed a persistent Nuthatch calling unseen in the woodland.

The woodland management team have been in cutting back the undergrowth and bracken, the small herd of shorthorn cattle have not been making much headway in that department. I prefer to see the woodland in its natural state untouched, but I can understand the argument for management , just.

A few Dragonflies have been seen, mainly Ruddy Darter females, today I found three Migrant Hawkers warming up on the bracken after a damp night. 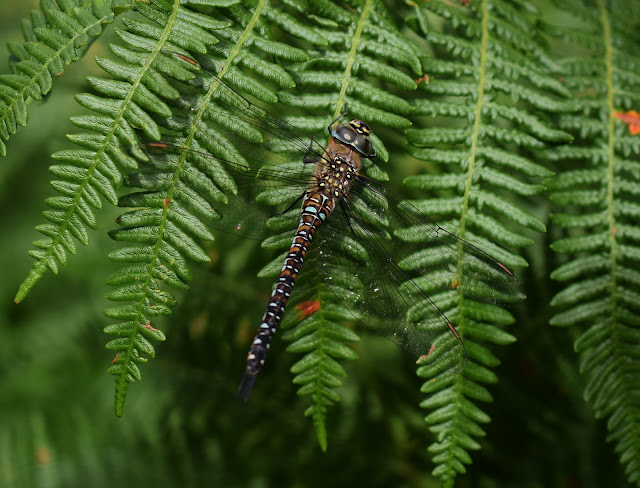 Fungi is appearing all around the woodland, seems strange to see it at this point of the summer, I usally associate it with early autumn. Maybe its the rainfall we have had of late providing damp conditions on the deadwood. I checked August sightings last year and sure enough fungi  was appearing then as well.

I am having great difficulty identifying some of these fungi with any certainty, so many similar looking fungi, especially to the novice observer. so I am going to leave them unlabeled until I am sure of there identity. no problem with the one below Chicken of the Woods. 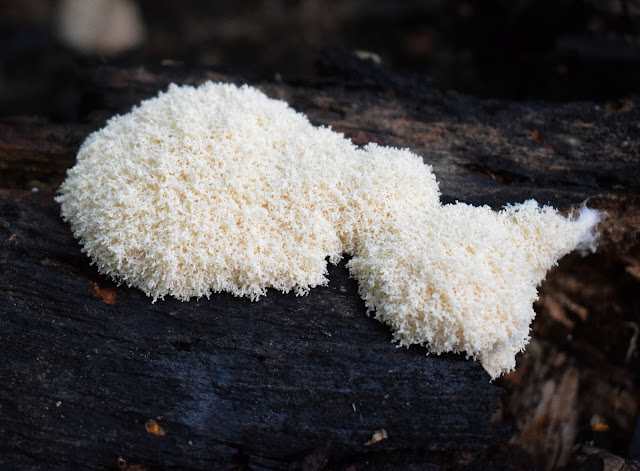 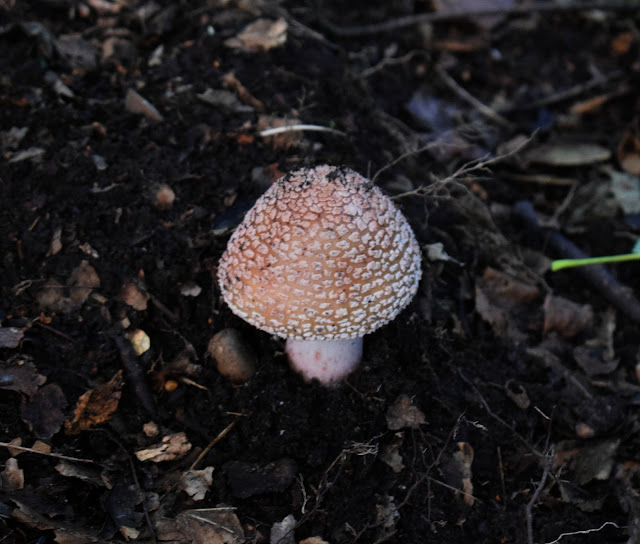 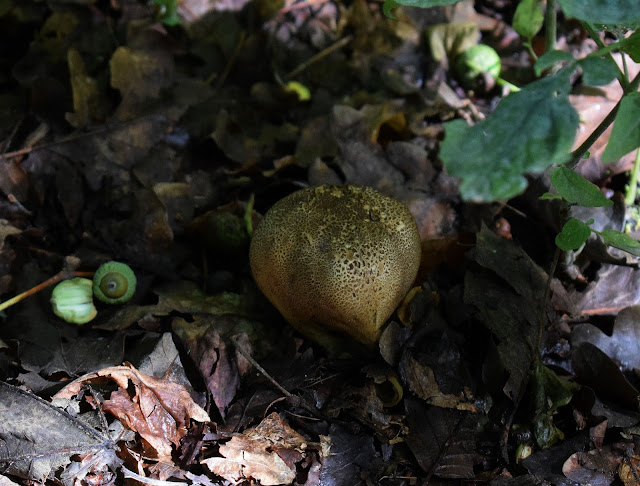 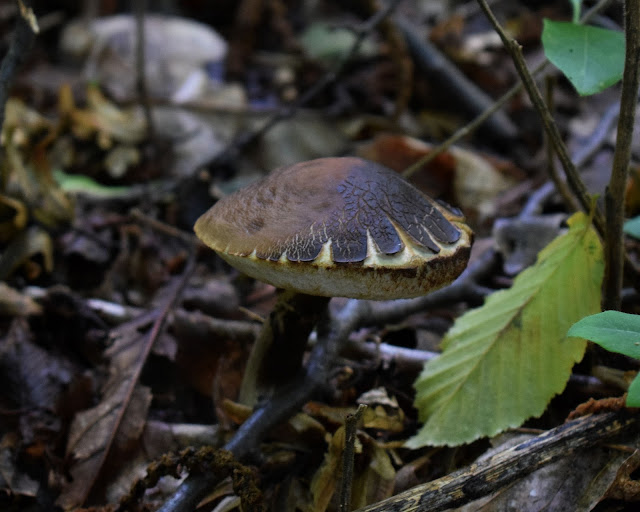 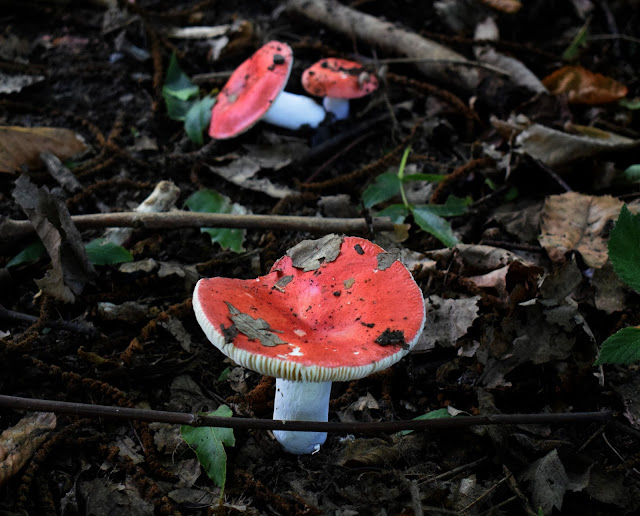 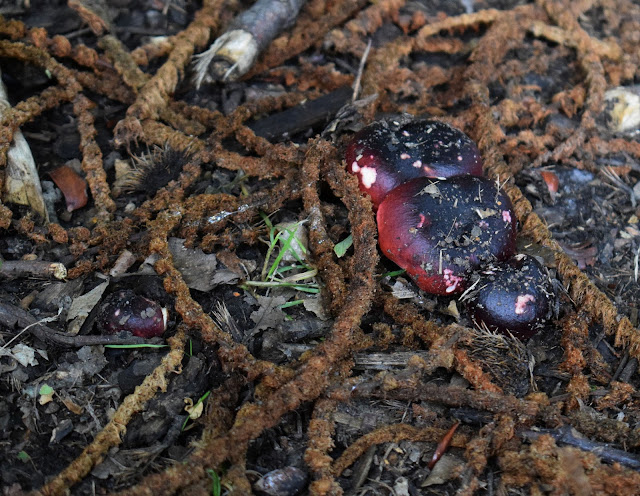 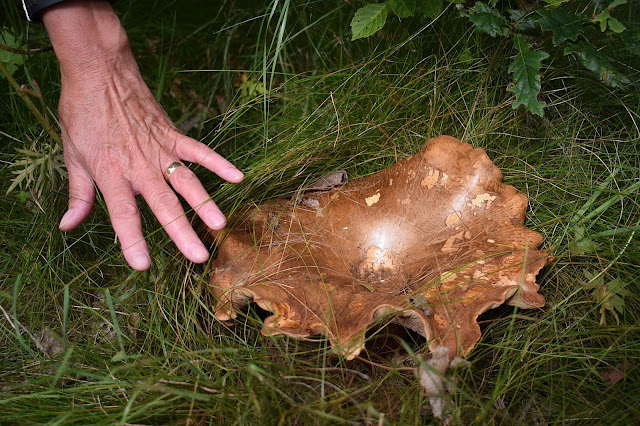 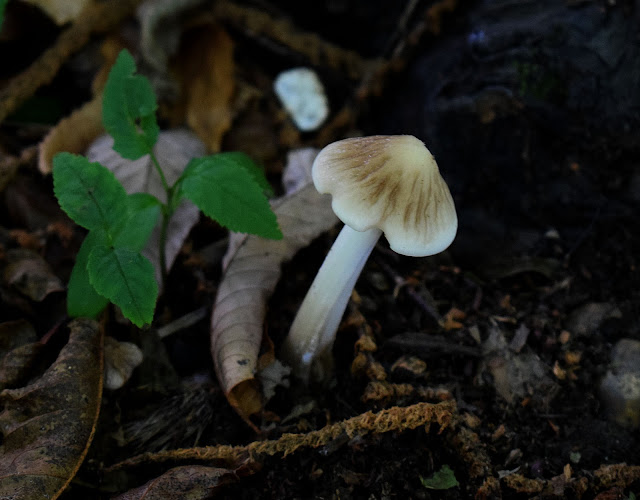 Some interesting colours and shapes there, still difficult to identify with any certainty though.

Most of my Butterfly sightings appear to be Gatekeepers of all sizes, some appearing quite small, just one sighting of a Common Blue in the glades, a few Red Admirals and some very faded Meadow Browns